Is Addiction a Disease or Choice? Look Closer

Ah, the addiction disease or a choice argument. People talk about it frequently and feel strongly about whatever position they take. This is likely because of the nature of addiction.

People who are in active addiction, directly and indirectly, hurt those around them. If you’ve been affected by someone else’s addiction, finding forgiveness and compassion for that person is like trying to climb Mt. Everest. It’s not easy, it takes time, preparation to get there, and a lot of effort.

With each person having their own personal convictions and experiences, the “disease or choice” argument has vast positional spectrums. Interestingly, there are those who become outraged when they hear anyone even SUGGEST that addiction is a disease. Addiction can evoke some pretty strong emotions in people.

At the end of the day, putting aside your existing judgments is necessary if you want to truly understand.

Here’s what you need to know and consider.

No Longer a Choice

In 2016, a groundbreaking Ted Talk was released by Markus Heilig on addiction and the brain. You may remember it but if you aren’t familiar with it, it’s worth a watch. It’s called Addiction in the Age of Brain Science.

In this video, Dr. Markus Heilig discusses addiction in the context of brain science. He shares that treating addiction as a brain disease is essential to making progress in its treatment, even though the idea alone is likely to be met with hostility by others.

Dr. Heilig’s message is that essentially, addiction changes the brain.

If we don’t attempt to treat addiction as we do every other disease, then we are doing a great disservice to those who are struggling. Operating without compassion does not relieve their suffering or our suffering from their actions.

Therefore, it is foundationally unwise to proclaim, “it’s a choice”, and leave it at that. Yet that is what so many people do.

Fortunately for us, medical professionals are starting to put aside their preconceived notions about addiction and find out just how addiction works on the brain. There have been many Neurobiologic advances to the disease model of addiction.

Once a person has reached the point where their brain has been rewired, choice is largely removed. Once this process has occurred, there almost always needs to be an intervention of some sort so that the addicted individual can be given the opportunity to get help.

It’s easy to have this interpretation that addiction is a choice from the outside looking in. An addict’s life is falling apart around them, they see the grave consequences their use has had on themselves and their loved ones.

However, they keep using. Kind of seems insane, right? Well, yeah actually this is the very definition of insanity.

When an addicted person has reached this point however, they have truly lost the majority of their self-control. It’s no longer a choice for them. While it’s a horrible thing that they are doing, they feel compelled to continue at all costs. They’ve been hijacked.

Another reason that people hold tightly to the addiction choice argument is that they fear there will be no consequences. A person might think to themselves that if addiction is labeled a disease, those who participate in criminal activity in active addiction will no longer be held accountable.

This is just not the case. Treating addiction as a disease does not mean that we have to allow people to get away with theft or other criminal activity. However, the idea is that we could take some steps to provide assistance with substance abuse treatment before locking them away.

Our justice system is flawed in many ways because we continue to treat addiction as if it is a moral failing. The truth is that many of those who participate in criminal activity would likely never do so if they weren’t suffering from addiction. We need to try to identify and help those people before we slam the door and throw away the key.

Environmental factors DO come in to play and some raise the chances of a person becoming an addict later in life. People who tout the “it’s a choice” side of the argument often ignore this.

Analyzing data can be an eye-opening experience when it comes to studying environmental factors and how they impact a person’s life. Let’s take for example a young teen who is raised in a household where her mother and father are both alcoholics and drug addicts.

In these environmental circumstances, the young teen has a higher chance of developing an addiction to drugs and alcohol. Humans learn from their environments and there are people who are addicted today that felt they had no choice. It was their environment, they did what they learned how to do.

You might hold to the stories of others who have also grown up in the same environment but did not develop an addiction. Well, good for them. They were fortunate enough to escape the grasp of addiction.

It doesn’t mean that they didn’t still have a higher chance of developing an addiction, it’s that they were able to make it through without addiction grabbing a hold of them.

This data here is only the tip of the iceberg as more data is revealed through studies. You might be asking, what’s the point?

Medical professionals have agreed that addiction is a disease. In fact, this Harvard articles goes into detail about the science of addiction and how it impairs the brain.

This medical professional understands that scientifically, the inability to use drugs has to do with deficits in the inner workings of the prefrontal cortex, among other areas of the brain. The doctor is pointing out where the issue is in the brain.

If we know where the issue is and we begin to try to understand how the disease of addiction plays itself out, our medical professionals can develop treatments. If you were to develop cancer, diabetes, or heart disease, you would trust the doctors and the specialists to help you.

Compassion for Addiction Can Move Mountains

A little bit of compassion for those who are struggling with addiction goes a long way. People often don’t understand why stigma is so harmful.

Often the case is that people are parroting false beliefs and perpetuating stigmas that they have learned from the environment around them. Addiction stigma (or stigma in general) is harmful because it pushes those who are truly suffering into the fringes of society.

This results in major isolation from a lack of personal connections and intense feelings of shame. And guess what addiction feeds on?

ISOLATION. Also, SHAME. (Who would have thought?)

Addiction feeds on isolation and the lack of connection between the person addicted and the world around them.

In this moving Ted Talk, neuroscientist Rachel Wurzman, Ph.D. delves deeper into this concept. Studying social neuroscience has helped her conclude that isolation does in fact fuel opioid addiction.

She has created a non-profit organization called Seek-Healing to provide space where those who suffer from addiction can heal through human connection.

Keeping a stance of “addiction is a choice” stifles even the tiniest sprouts of compassion and keeps stigma going. And stigma is awful.

We hope you found this helpful.

If someone you love is struggling with addiction, we urge you to realize that their choice is now removed from them. Get in touch with us today to talk to one of our addiction intervention specialists. We can help your family. 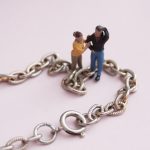